Two scholarships have been created in memory of one of the founding fathers of EMWA, Geoff Hall, who sadly passed away in 2010. Geoff was not only a founding member of EMWA, but was also a past president, wrote the original EMWA constitution, was an extremely experienced workshop leader, and a stalwart of the social scene. Geoff felt very strongly that the future of EMWA lies with younger members joining and moving through the organisation to become workshop leaders and members of the EMWA committees, and so the scholarships are an ideal way to honour Geoff and his huge contribution to EMWA.

Up to two scholarships are available in memory of one of the founding fathers of EMWA, Geoff Hall, who sadly passed away in 2010.

The submission deadline for entries is 30 September 2020.

Eligible applicants must be new medical writers: that is, they intend to enter the profession or have been employed for no longer than one year as a professional medical writer, including freelance work. They need not be current members of EMWA.

Applicants must include a short statement declaring what work they do or have been doing and that they meet the eligibility criteria.

What could a Scholarship Award winner receive?

Submission of entries and announcement of winning entries

The title of the 2019 essay was ‘How would you go about identifying a predatory journal?’ This year’s scholarship winners were Adriana Rocha and Petal Smart.

Adriana Rocha has a degree in Biochemistry from Portugal, which was followed by a PhD in Medical Neurosciences in Germany. After a postdoc in the USA she decided to leave academic research and transition into industry. She is now a freelance medical writer.

Petal Smart is a veterinary surgeon by training. Over the past five years, she has been a medical/science editor serving primarily non-native English-speaking authors. She has a keen interest in regulatory affairs as they relate to medical devices, both those intended for human use and those intended for veterinary use.

Adriana’s and Petal’s winning essays are presented in the June issue of Medical Writing, and we wish them the very best at the start of their very promising medical writing careers.

The title of the 2018 essay was ‘The medical Writer: Partner or Servant?’

The scholarships committee decided to award only one scholarship, to Abbie Fearon. Abbie received her PhD in tumour biology in 2015 from Barts Cancer Institute, in London. She then moved to Switzerland to take up a role as a postdoctoral research scientist at the ETH, Zürich, and Abbie is still there today. She also has a real love of science communication and is now focused on combining her research career with scientific writing for the general public.

John Carpenter presented Geoff Hall Memorial Scholarships to Marisa Granados (left) and Amy Joughin Parr (right). A networking reception was then held and gave everyone a chance to meet up with old friends…and to make some new ones. 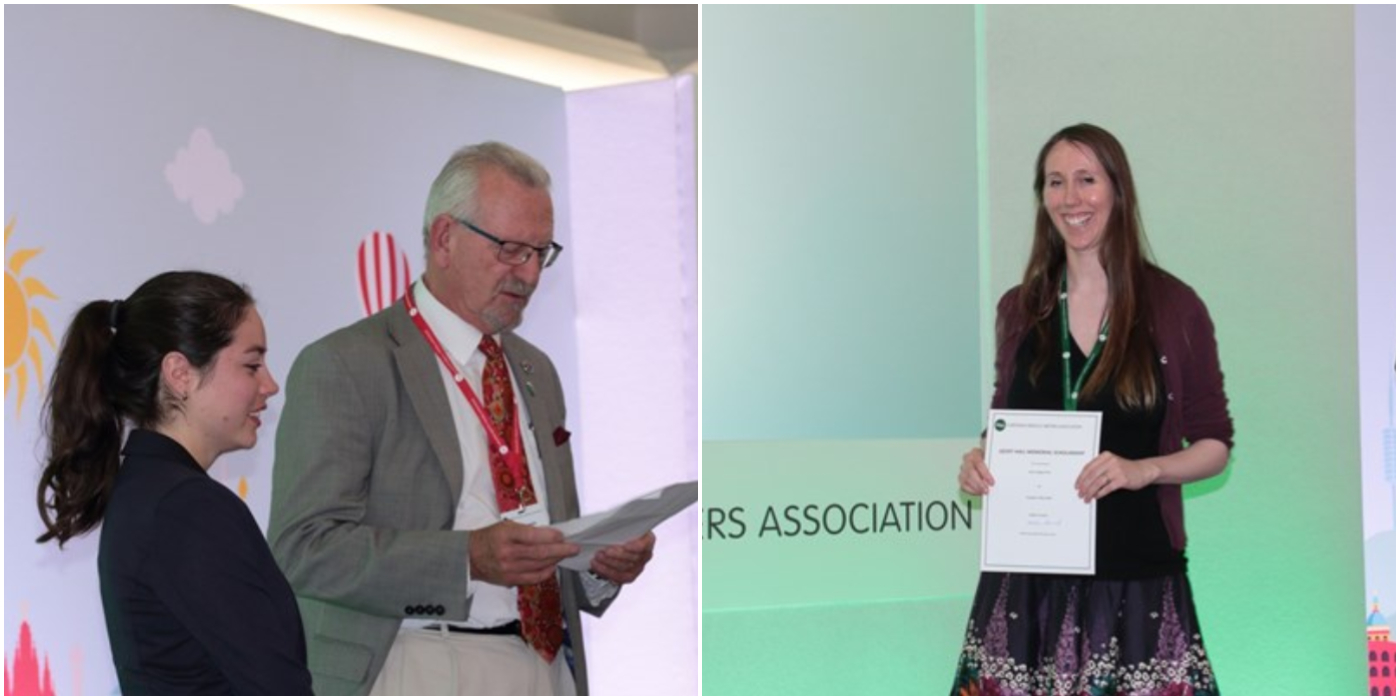 The Geoff Hall Scholarships are given in honour of a former President of EMWA. Geoff was a very special person, an extremely valued member of EMWA, and a very good friend to many EMWA members. He firmly believed that the future of EMWA lies in our new and potential members, and so it’s a very fitting legacy that we have the Scholarship Awards in his memory.

The title of this year’s essay was ‘Good Medical Writing Saves Lives’. There were a record number of entries, and the winners were Sophia Whitman and Cirsten Verleger.

Sophia Whitman obtained degrees in immunology and psychology, and then left this career to become a doctor. Following the birth of her son, she took part time work as an intern medical writer with St Giles Medical. Cirsten Verleger trained as a doctor in Germany, and then became a translator for medical and pharmaceutical texts with a degree in business translation.

Sophia’s and Cirsten’s winning essays are presented in the next issue of Medical Writing, and Cirsten was able to receive her award in person on the stage at the opening ceremony of the 2017 EMWA Spring Conference in Birmingham.

We wish them both the very best for what promises to be two very exciting careers in medical writing. 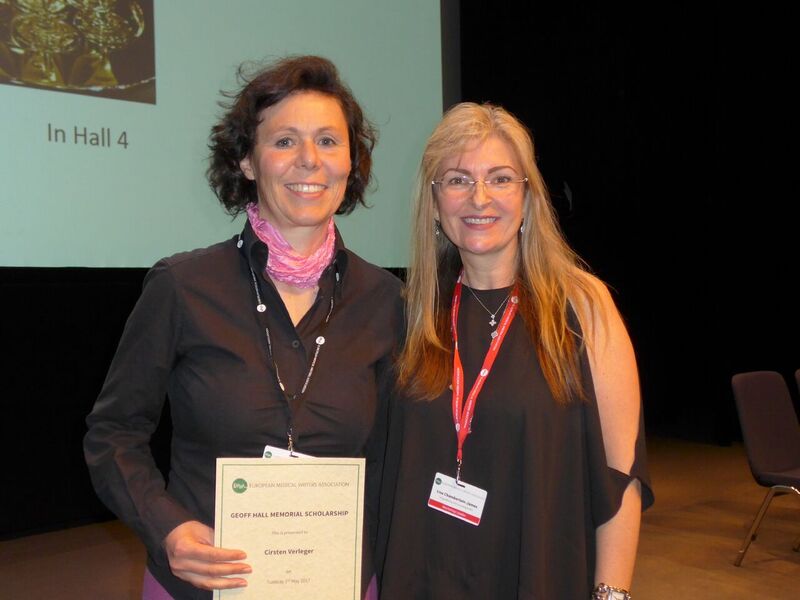 Cirsten (left) being presented with her award by Lisa Chamberlain James of the Geoff Hall Scholarships Committee. 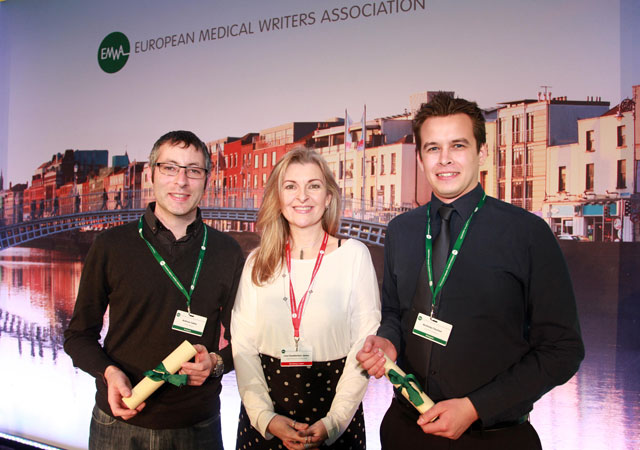 Andreas and Nicholas being presented with their awards by Lisa Chamberlain James of the Geoff Hall Scholarships Committee.