The Nick Thompson Fellows welcomed James Visanji to their ranks at the EMWA Vienna Conference in May. An EMWA member since 2007, James has been an incredible asset to EMWA over the years and has been an untiring contributor toward making EMWA the vital, thriving, and financially stable organisation we know today.

Most EMWA members are unaware of the behind-the-scenes efforts by James who, having served as Treasurer from 2013-2019, has taken on this thankless role (any volunteers?). His business sense and pragmatism have served EMWA very well, as has his willingness to tackle difficult situations.

The financial stability achieved under James’ watch has allowed EMWA to keep the membership fee stable for several years now. Further, EMWA was able to expand its educational offerings, and even offer free events such as the Internship Forum/Getting into Medical Writing and the Freelance Business Forum.

James has shown a willingness to step forward and give of his time and energy to benefit our members and our profession. 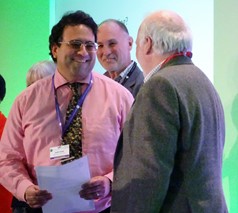 James (left) with Art (right) at the ceremony in Vienna.